EDGE SDK is shipped with a simple C language API for entering EDGE commands. The central function in this API imitates the EDGE command line, allowing EDGEcommands normally issued from the command line to be called through the API. Four supporting functions for freeing allocated memory, translating returned error codes, and initializing and cleaning up the API are also provided. This package makes it simpler to call EDGE commands from other languages and to improve performance when comannds are called repeatedly 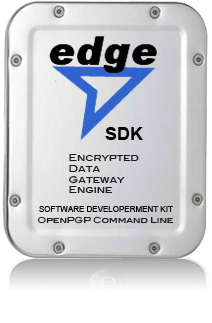 HEADER FILES
The following header files are included in the EDGE SDK package:

DYNAMIC LIBRARY
EDGE SDK ships with a dynamic library (DLL) exporting 4 functions. The name of this library differs depending on the platform.

A corresponding call to EDGECleanUp() must be made at some point to release the context. You can call EDGEInit() more than once in a process, provided you call EDGECleanUP() to release the current context before you create a new one.

The syntax and parameters for each of the EDGE SDK API functions are described below.

NOTES
A call to EDGECleanUp() must be made to free the context created by this function when a process finishes making EDGE SDK API calls. The same process can create more than one process before releasing the first created one.

This function returns 0 if no error occorred.

For more information on EDGE SDK contact support@authora.com | For 2016, Eterna will release what will perhaps be the nicest version of the "new" - with these Eterna Royal KonTiki Chronograph watches. All Eterna Royal KonTiki currently use forms of Eterna's very nice in-house made Caliber 39 (which our David Bredan thoroughly detailed here). Eterna boasted that the Caliber 39 was designed with over 80 different potential layouts in mind, and this chronograph dial is just one of.

Customize EDGE to meet your exact business requirements. If your cryptographic functionality needs are limited you will save on licensing.

Whether you require full functionality with unlimted keys,or have limited requirments, ie: sign only, or decrypt veryify only, or you just have 1 partner you cryptographicaly communicate with and only need one key pair, let us know & we will customize your license.. d mor